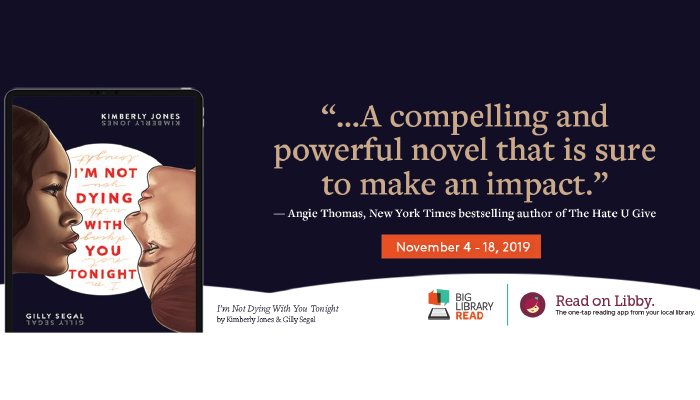 ST. AUGUSTINE, FL — 11/04/19 — St. Johns County Public Library System (SJCPLS) patrons can join millions of readers worldwide in a riveting tale of survival during Big Library Read, the world’s largest digital book club. From November 4–18, booklovers can borrow Gilly Segal and Kimberly Jones’ powerful debut novel, I’m Not Dying With You Tonight, from their public library as an ebook or audiobook with no waitlists or holds. SJCPLS readers may join by visiting https://sjcpls.overdrive.com or downloading the Libby app then discuss online at https://discuss.biglibraryread.com/.

Big Library Read is available in over 22,000 libraries and schools around the world, including more than 90 percent of public libraries in North America. It is facilitated by Rakuten OverDrive, the leading digital reading platform for popular ebooks, audiobooks and magazines. I’m Not Dying with You Tonight was chosen as the next Big Library Read by a popular vote of readers, librarians, teachers and students worldwide.

I’m Not Dying with You Tonight follows two girls with two very different backgrounds who must rely on each other to get through the violent race riot that has enveloped their city. When both girls attend the Friday night football game, what neither expects is for everything to descend into sudden mass chaos. Chaos born from violence and hate. Chaos that unexpectedly throws them together. They aren’t friends and hardly understand the other’s point of view. But none of that matters when the city is up in flames, and they only have each other to rely on if they’re going to survive the night.

Big Library Read is an international reading program that simultaneously connects millions of readers around the world with an ebook through public libraries. I’m Not Dying with You Tonight is the 20th selection of this program which began in 2013 and takes place three times per year. Readers can join an online discussion about the book at https://discuss.biglibraryread.com/. The free program runs for two weeks and only requires a St. Johns County Public Library System card to get started.

I’m Not Dying with You Tonight was published by Sourcebooks and can be read on all major computers and devices through Libby or libbyapp.com, including iPhone®, iPad®, Android™ phones and tablets and Chromebook™ without waitlists or holds. Through Libby, readers can also “send to Kindle®” [US libraries only]. The title will automatically expire at the end of the lending period, and there are no late fees.

To join the discussion, learn about past Big Library Read titles and download Libby, visit biglibraryread.com.